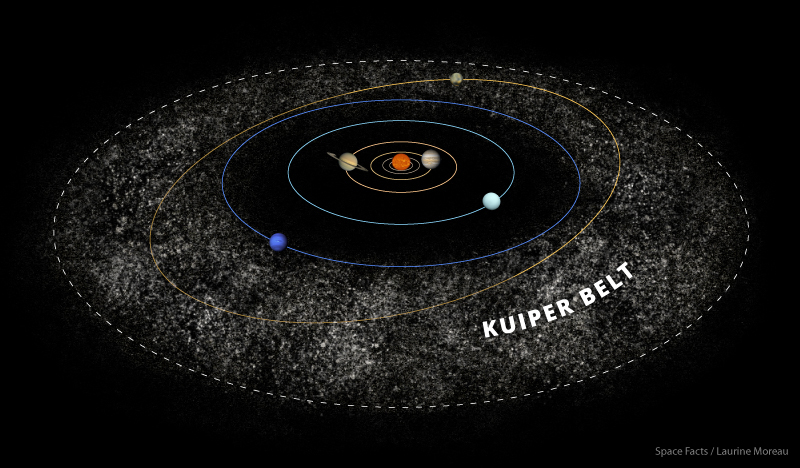 In the outer Solar Sytem there is a zone which is known as the Kuiper belt. It orbits around the sun and receives its name in honour to the Ducth-American astronomer Gerard Kuiper who predicted the existence of this belt in 1951 but…what is exactly  the Kuiper belt ? What is the relation between the Kuiper belt and Pluto?

In 1930, Kenneth Edgeworth suggested the idea that there was a group of bodies beyond Neptune besides  Pluto ( which was discovered  by Clyde Tombaugh the same year) . Then in 1951, Gerard Kuiper rekindle that idea in his investigations.

NASA´s  Pioneer 10 spacecraft  entered to an area beyond Neptune in 1983 but did not explore it. Despite all these assumptions about  the Kuiper belt, it was until 1992  when David Jewitt and Jane Lu officially confirmed its existence thanks to the technology advances in telescopes.

Fourteen years later (2006), the NASA sent the first spacecraft to explore the Kuiper belt and Pluto in a mission named New Horizons. In 2015, the device arrived to  that area. In 2016 we finally saw a Pluto´s photo and in  2019 we were able to observe an image about a Kuiper Belt Object (KBO) for the first time. That KBO is named  2014 MU69 but is better known as Ultima Thule.

The Kuiper belt is an area  located in the outer sexoquente.blog and its distance from the sun is like going from earth to sun 30 times!  This means it  is far away  from the sun and that’s basically why in the belt you may see frozen volatiles popular known as KBO´s  or Trans neptunian objects (TNO´s) and other icy objects.

The Kuiper belt´s inner edge starts at Neptuno´s orbit and as we were saying, it is  mainly formed by frosty bodies that are smaller than the moon that orbits around Earth  despite the fact that some of them are planets such as Pluto.

Astronomers think that the objects found there, may be leftovers from the Big Bang explosion which originates the universe but were affected by Neptune’s  gravitational influence and that’s why they are dispersed. According to the NASA, there is where some  comets come.

Scientists believe that the study of the Kuiper Belt may help us to understand more about how planets are formed and the way they migrate.  Alan Steirn said: “We have firm evidence that many KBOs (including some large ones like Pluto), were born much closer to the Sun, in the region where the giant planets now orbit.”

There are two kinds of asteroids in the Kuiper belt: dynamically cold population  and dynamically hot population. It is important to highlight that  the names are not related to the temperature, they were classified according to their analogy with gas particulas.

What can I find in the Kuiper belt?

In the Kupper belt you can find asteroids,KBO´s, TNO´s, moons and dwarf planets.  The biggest planet is  Pluto (2300 kilometers wide) and has five moons around it:Charon, Kerberos, Styx, Nix and Hydra.

As we were saying, the temperature in the belt  is very freezing  so  Puto’s  temperature is commonly  between  -240 and -218 Celcius grades, as hot as brazil’s hottest brasileirinhas.  Pluto is composed by methane, nitrogen ice, carbon monoxide and water.Then  it is not surprising to find  cryovolcanoes ( volcanoes that throw ice instead of lava).

There are other dwarf planets smaller than Pluto in the Kuiper Belt such as  Haumea Makemake and Eris.  Like Pluto, these planets also have their own moons; Haumea has two (Namaka and Hi´iaka), Makemake has one (Mk2) as well as  Eris (Dysnomia).

Just to compare Earth with the dwarf planets previously mentioned, check the following data which corresponds to the radius of each planet:

Is there something beyond the Kuiper Belt?

Due to New Horizons´ research, we have more precise information about the Kuiper belt and Pluto and we are sure that in the coming years more relevant information will be discovered.

Meanwhile let’s be on the lookout of new NASA discoveries and continue reading ouR articles so that you can be well informed.